Over the last several days, if you’re lucky enough to be on my list, you’ve received several educational emails about the power of belief and how to make your first money online.

The differentiator is the power of belief.

Once you’ve experienced something, you no longer have the doubt that it’s possible.

The reason that many online marketers can create a product, make boatloads of money, and then do it over and over again is because, after they had done it once, they knew it was possible. There was no longer doubt about whether or not they could do it.

So many people decide that they want to start down a path of creating an online income. For some, it takes them years and years to even make their first dollar while experienced online marketers seem to create new successes effortlessly.

Create a quick win. Do something that’s going to quickly earn you your first few bucks online and break past the self-doubt as fast as possible.

Do something that will immediately change the belief about what is and isn’t possible.

This blog post is somewhat of a continuation of the emails that I’ve been putting out over the last few days.

The email I sent out today (Aug. 19th, 2015), had one way to quickly create your first few bucks online… This post has seven more.

Create a gig on Fiverr

In my opinion, Fiverr is the simplest way to create the quick win.

You can create a gig in minutes, doing almost anything, and see some sales on it by the next day.

When I say “anything,” I mean anything!

Some of the more popular gigs on Fiverr are things like this: 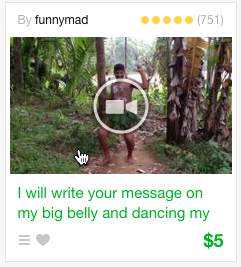 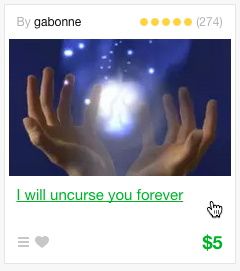 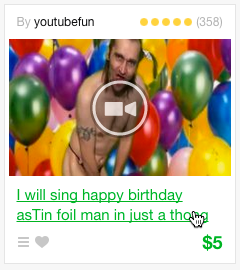 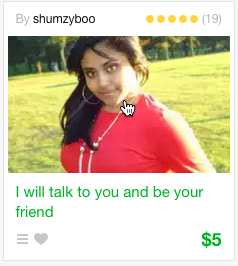 Notice the number in the top right corner of each ad? That’s how many reviews the product has had, not the number of sales.

So yea… People think of some interesting things to offer on Fiverr.

Me, personally… I like to create little mini-training videos that teach a concept in about 10 minutes or so and sell those… They are simple to make, and I get to do the work once and sell it over and over again.

Once you have a few sales on Fiverr, Fiverr’s internal promotion takes over, and you’ll start to see sales from people searching in their system.

If you haven’t already, about my method for creating and selling things on Fiverr.

Do freelance writing on Upwork or ProBlogger job boards

If you have any writing skills whatsoever, you can pretty easily grab a gig on Upwork (used to be Odesk & Elance) or the Problogger Job Boards.

I hire a ton of writers for my other niche blogs. I usually look on Problogger when I need a writer, but I’ll occasionally post an ad on Upwork as well.

It may not sound like a ton of money, but it will break you past that doubt that you’re capable of creating an income online… Plus, a 500-word article would probably take less than 30 minutes to write.

With Upwork, you can just hunt for jobs and apply. People are willing to work for pretty cheap, so the competition is steep. But, heck, if you want to make your first few bucks online, underbid people and knock the work out of the part.

Problogger’s employers have a bit higher standards. Typically, I would pay anywhere from $30 – $75 for a 1,000 word to a 1,500-word article when I find people on ProBlogger.

There are a lot of great writers paying attention to ProBlogger so, while the pay is higher, the competition is tougher to beat out… But if you can provide high quality and underbid everyone else, you’ll get a ton of work. 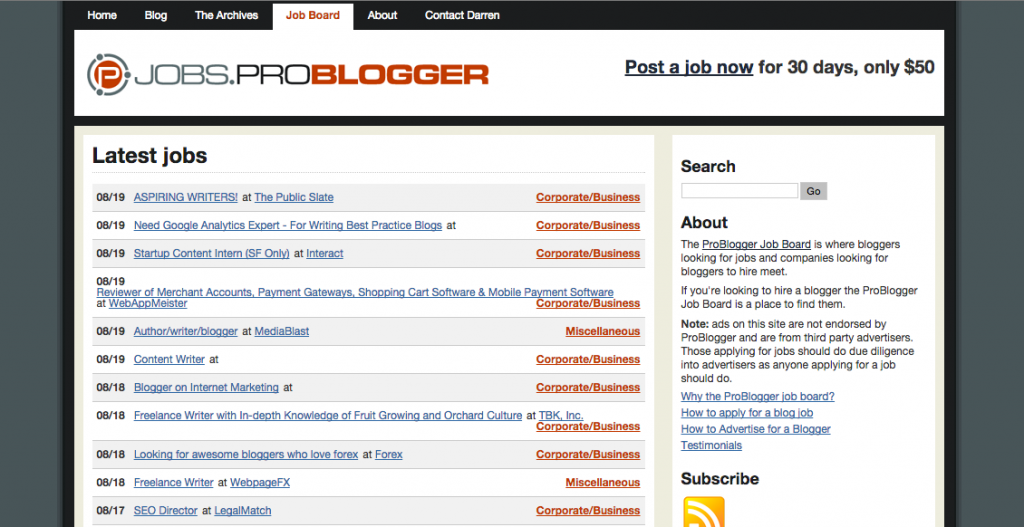 Find something worth $20 and sell if for $1 on Craigslist 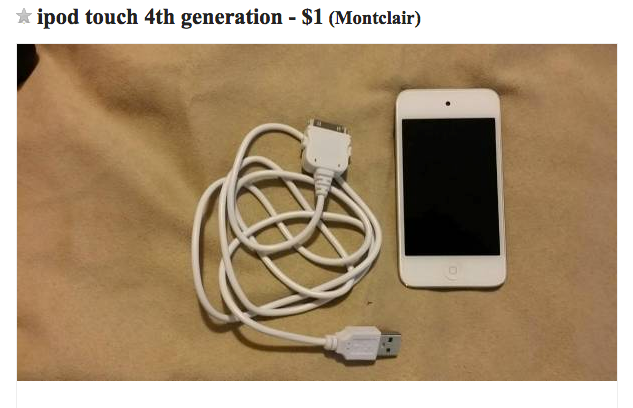 This was an idea taken directly from Neville Medhora of Kopywriting Kourse. I tried to find a blog post where he was talking about this and couldn’t… So I think he may have talked about it in an email.

The idea is to find something that you own that’s worth at least $20 and put it for sale on Craigslist of eBay for $1.

Yes, it’s not fun knowing that you’re undervaluing it but, you’ll see real quickly how easy it is to create an income online.

It also proves the point that if you overdeliver on the price that you charge for something, selling becomes easy… But that’s a discussion for a different blog post.

Get active on forums 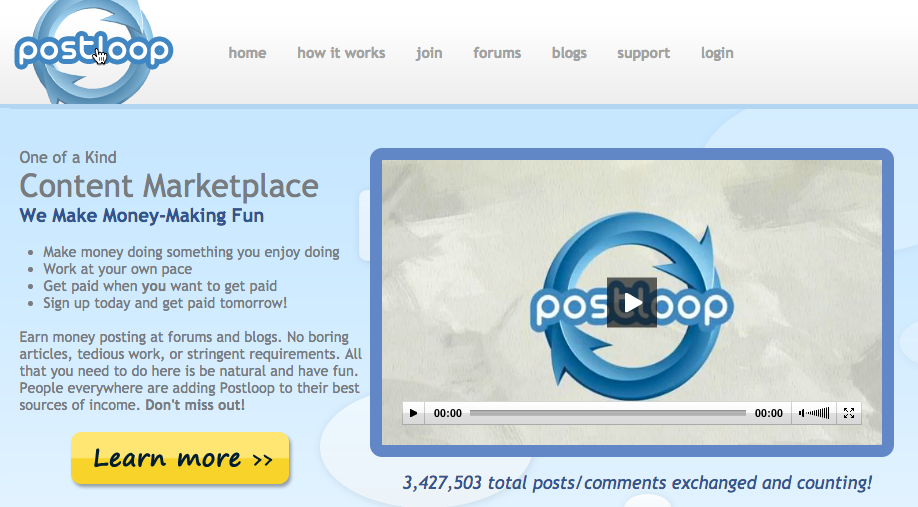 This is one that I just discovered yesterday…

There’s forums out there that are relatively new. When forums are new, nobody wants to join and interact because there’s no one else on them…

That’s where Post Loop comes in. They come in and pay people to interact in newer communities to kickstart the engagement.

You can sign up to be a content writer and, after 10 or so engagements in the forums, you’ll have made about a buck.

Do what you know and offer it on Craigslist

This one is so simple, but people just don’t do it…

Do you have a skill or service you can offer to the world? Maybe you know how to install WordPress, maybe you’re decent with Photoshop, or maybe you’re a good photographer.

Do a quick hunt on Craigslist for people that are looking for that skill and reach out, offering them a price to do it. Go low and overdeliver on the project and watch as they start to recommend you to their friends.

It’s such low-hanging fruit and things like installing WordPress could take you 15 minutes and earn you a quick $20.

Pick an affiliate product, write an in-depth article and share it everywhere

If you love writing, like me, this one is fun…

This is probably my favorite way to make some money because, typically, this method keeps paying for itself over and over again.

Pick a product that you enjoy using. Maybe it’s your autoresponder or hosting company or maybe it’s your favorite digital camera that people can find on Amazon.

Write an in-depth article about that product. Explain some neat things you can do with it, teach a few techniques with it, and talk about why you like it so much.

Make it somewhat of an educational training post that also includes a product review and endorsement.

Then link out with your affiliate link. 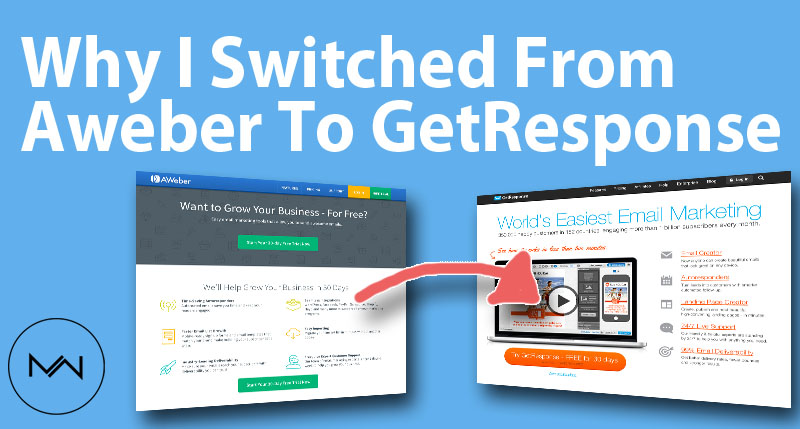 On this blog, I talk about Easy Video Suite.

You can see that in every one of those posts, I teach in-depth about how to use the tool that I’m recommending.

All of these posts generate affiliate income for me.

In the recent FB Uncovered course that I launched with Josh Bartlett, we taught a little affiliate trick that we use to generate income from Facebook.

We pick an affiliate product that we like and endorse, run Facebook traffic to it and create a bonus to help sell the product. We then use Facebook retargeting to bring people back to the site again and again.

It’s a bit technical, but it’s always generated a profit for us.

Here’s a video that I made that runs you through this strategy:

This entire strategy is taught inside our FB Uncovered course.

So that’s 7 ideas that I quickly thought of to earn those first few bucks online.

Also, if you want new income generating ideas month in and month out, consider joining The Evergreen Profits Letter!